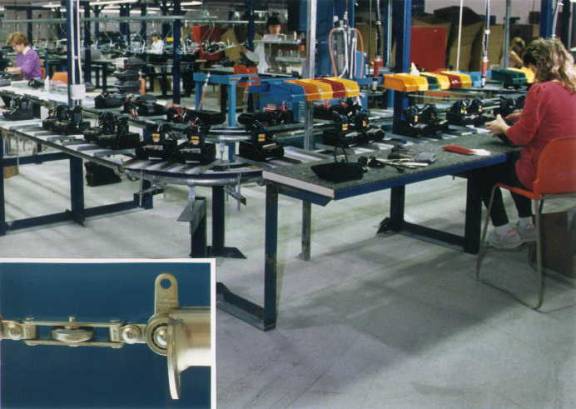 When Shadwood Enterprises Ltd., a manufacturer of portable battery charger units, opened its new plant in North Bay, Ontario, management wanted a single conveyor to move goods throughout production. They installed an inverted, floor mounted conveyor that carried the chargers between the plant’s four processing stages.

The system consisted of four identical, inverted assembly line conveyors, each approximately 100 ft long. Each conveyor was fitted with 16″ x 12″ trays, specifically designed to hold the chargers. Each tray had two compartments, and was mounted on a 24″ center.
A single conveyor transported goods to the assembly, testing, packaging, and palletizing stations. At each station, when the chargers were removed from the conveyor, the empty trays remained. Empty trays constantly circulated on the conveyor and allowed workers to replace goods onto the conveyor as rapidly as possible.

Paul Stroz, plant manager for Shadwood, described the conveyor system as “a production manager’s dream.” By moving goods to and from each station, the conveyors minimize the amount of manual work done within the plant.