Plasan Carbon Composites had a problem. Located in small-town Bennington, Vermont, Plasan designs and producs OEM (original equipment manufacturer) body parts for vehicles. The firm is well known for its use of carbon fibre as a building material.

Plasan (originally called Vermont Composites Inc) was sending off a carbon-fibre fender for a General Motors Z06 Corvette to an outside custom coater to be primed. The custom coater was not doing a very good job, however. The vendor was inefficient, operating in decidedly low-tech fashion: “They were literally pushing these parts around on carts on the floor,” recalls Bob Davis, corporate paint engineer at PlasanUSA.

“We found we were having quality issues with these outside painters,” Davis continues. “There were also issues of timing and delivery. So, we decided to build a paint system in-house. This would give us more direct control over quality, timing, schedules and everything else.”

The paint system had to include an automated conveyor—a piece of equipment the custom coater lacked.

“In order to maintain process control, in terms of time in the washer and times in the oven, it’s better to have a moving conveyor that you can clock and know exactly how much time [a piece has been in a particular area] as opposed to pushing something into an oven on a cart and starting a stop-watch,” states Davis. “It’s a much more consistent process to use a conveyor system.”

There was another reason for wanting a conveyor: “As part of the standard for making their parts, GM prefers that parts are not touched by workers during the painting process. The obvious solution for this is to use a conveyor to take the parts throughout the various steps in that process,” explains Marc Seward, general manager, Industrial Division for Bloomfield, Connecticut based Managed Air Systems.

The decision by Plasan officials to ditch their vendor and build an in-house paint system was made in late summer 2006. Shortly thereafter, Plasan “sent out requests for quotes to three different contracting firms,” recalls Davis. “And we selected Managed Air Systems based on the quality of their bid and their price.”

Managed Air would serve as the “systems integrator”—figuring out what components Plasan needed, sourcing these components, then overseeing installation. Seward worked as point man on the project.
In September 2006, the automotive wing of Vermont Composites was purchased by an Israeli firm called Plasan Sasa, and adopted the PlasanUSA tag. Around the same time, PlasanUSA started working closely with Managed Air. Plasan provided tech specs and Managed Air set about locating appropriate suppliers. Plasan wanted a system that could paint a variety of parts, not just fenders. They had some design ideas as well.

“With paint systems, if you have an overhead conveyor and you’re painting automotive Class A surfaces, you can get particles of dirt that come down off the conveyor or the trolleys or the paint hooks,” explains Davis. “So the best practise is to have a floor mounted conveyor and that way, any dirt that builds up on the conveyor is below the part.”

Thing was, some of the parts Plasan planned on putting through the conveyor “could be as tall as six feet plus the height of the part holder,” says Seward. “When the conveyor was above the parts this was not a problem as gravity would hold them in place as they moved around the system. By putting the conveyor under the parts, the top of the six foot tall part could now sway as much as nine inches off center.”

This fact came to light when Plasan ran a series of simulated tests using CAD drawings. The computer tests indicated that large auto parts would have massive wobble on a standard conveyor. Space constraints in the area designated for the conveyor at Plasan’s plant limited Managed Air’s options.

Seward contacted a Mississauga, Ontario manufacturer he had worked with in the past, called Pacline Overhead Conveyors. He explained his situation to Dan Hirschorn, a project engineer at Pacline, who came up with a solution.

“[Hirschorn] recommended Pacline’s heavy duty overhead conveyor, the PAC-MAX™. After some testing, it was determined that because of the PAC-MAX™’s four-sided track, a six foot high part would sway no more than one-and-three-quarters of an inch off center,” states Seward. “Dan also recommended we turn the conveyor on its side which would help prevent over-spray from getting inside the track and on the roller bearings … I cannot stress enough how much the PAC-MAX™conveyor solved our problem of having the conveyor mounted under the parts.” 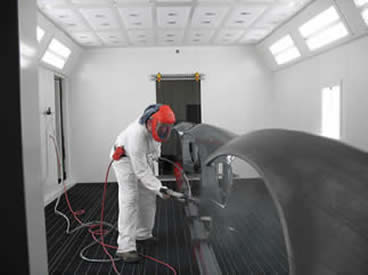 Pacline built the conveyor, while Eaton Fabricating of Grafton, Ohio, made the washer and ovens. The downdraft spray booth was manufactured by Global Finishing Solutions, Osseo, Wisconsin, (in Canada, Global is based in Barrie, Ontario) while Graco, Minneapolis, Minnesota, made the electronic proportioner. Becca, from Kennesaw, Georgia, manufactured the gun washer and solvent reclaim system while National Partitions of Knoxville, Tennessee built a wall that was used in the system.
The conveyor itself didn’t feature a belt, but rather a 420-foot chain as well as a modular track and bolted design. The belt-less conveyor was “packaged in crates, shipped in crates” and put together at Plasan’s facility, says Hirschorn.

Assembly of the paint system began in May 2007. The conveyor was laid out so it formed a U-shape in a space measuring 49 ft. by 71 ft. 7 in. according to Seward.

“We had many curves and corners—that was part of the unique aspect of the project,” he says.

Because the conveyor boasted a bolted design, welding was not required for assembly. Construction, says Hirschorn, was “like putting together a big Meccano set.” The conveyor was mounted on pedestals on the floor and turned on its side, as per Hirschorn’s recommendation.

“The installation was super easy, because all the components were modular and brought in, fit in place and connected in a very short time,” adds Davis.

Once the design issue was sorted out, Managed Air went to work getting the major components in order. These included “the conveyor, four-stage washer, dry-off oven, down-draft spray booth and cure oven,” states Seward.

“The Managed Air team did everything except the final connections of utilities, gas, water and electricity,” he continues. “We cleared the rooms, finished the floors to their specs, and then they brought in the equipment and installed it.”

The original finish date was the first week of June 2007.

“The system was functioning the week prior to that, but we didn’t sign off on the function until the 6th of June because we like to run the equipment for a period of time to make sure it is reliable,” says Davis.

“We had a photo session and a little ceremony when we ran the first part around the conveyor—nothing fancy. No confetti,” he laughs.

So far, Plasan has been delighted with the conveyor: “The main features that I like about it, there is no surge, no variation in conveyor speed. Because the system is robust, somewhat overbuilt, we have a lot of stability and line speed and part position,” says Davis.

Aside from the actual paint spraying (which is done manually), the conveyor works automatically. Davis has no major mechanical problems to report aside from some fine-tuning here and there. In fact, the PAC-MAX™ had boosted Plasan’s corporate profile.

“We are using [the conveyor] as a tool to help get new business,” states Davis. “Because of our process capability, it is a selling point to our customers that we can do moulding, finishing and painting all in one location, We are pursuing new business in automotive all the time … we’ve had real success with the system.”

Seward pegs the total budget for the project at around $1 million. Davis has no details about “profit and loss per se” but believes the conveyor has been a boon to the bottom line. For one thing, Plasan no longer has to rely on an army of workers toting pushcarts to do the painting.

“The labour savings alone, has got to be a factor of five,” says Davis. “In other words, we are only using about one fifth the labour to load and unload parts that would normally be pushed around on carts from booth to booth.”

Parts currently handled by Plasan include the Corvette ZR1 hood, roof and fender, the Corvette Z06 fender, the Mustang Shelby hood, etc. Plasan is running “about 750 parts a week through the paint system at present, says Davis. “It’s not a huge volume because these are specialty vehicle parts.”

Production is set to increase, however: with new GM contracts in hand, Plasan will be doing “over 1,000 parts a week by the end of April. Probably be 1,400 by the end of the summer,” he says.

An admirable target for a successful project Davis describes as “a lot of fun” for everyone involved.