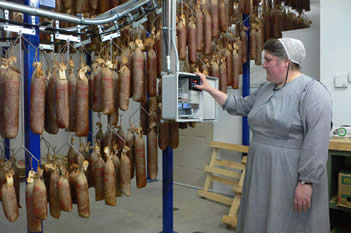 Kitchen Kuttings is a small business located in the Mennonite community of Elmira, Ontario. Owned by three Old Order Mennonite women, Kitchen Kuttings began as a small shop selling cheese and homemade products such as jams, pickles, maple syrup and their own homemade summer sausage. As their business grew so did the demand for their sausages and the need to produce them in larger quantities.

To handle the increased sausage production, a new meat curing facility was planned. Kitchen Kuttings needed a way to dry up to 1,800 sausages at a time with a possible future expansion of 3,000 sausages. At this volume, any manual system of racking would be very cumbersome, labor intensive and difficult to manage.

The construction company for Kitchen Kuttings contacted Pacline initially with an interest in the PAC-MAX™ heavy duty conveyor, which could hold very large carriers with numerous sausages. The layout they were suggesting involved a standard back and forth ‘snaking’ conveyor.
After discussing the application and capacity goals with Pacline engineers, Pacline suggested a system using their PAC-LINE™ enclosed track conveyor with 8 sausages per foot of conveyor. The conveyor layout would be designed in a spiral type arrangement where the conveyor track would wrap around on itself.

This set up was an ideal way to increase the storage density of the system. By utilizing this spiral design and some innovative support structures, it was possible to carry the entire 1,800 sausages on an upper level to meet the required sausage capacity. (A conveyor run was incorporated to extend down to the load area). This left the lower area of the drying facility open for storage. To address the need for increased capacity in the future, a second level can be added (below the first level) which will allow for over 3,000 sausages.

By using 3 take-up units on the 230 foot system, Pacline was able to add forward and reverse controls to cut waiting time in half when positioning the conveyor for loading and unloading. While the Pacline conveyor system brings a new level of efficiency to this traditional business, the Mennonite owners still maintain the same high standard of homemade quality in every sausage they make.