Cardwell Westinghouse is a company whose history goes back over 100 years. The original Westinghouse Air Brake Company was founded by George Westinghouse in 1869. Westinghouse developed the first automatic air brake system that was installed on a Pennsylvania Railroad passenger train in 1872. The efficiency of this new system greatly improved the safety and popularity of rail transportation in North America.

As Olavarria began to reconfigure the production line, it became obvious that major changes were required at the assembly stage.

The existing conveyor system used for assembly of the slack adjuster was a manual free trolley conveyor. The existing carriers on the conveyor line were big, bulky, heavy and becoming damaged from the manual lifting of parts onto the carriers. 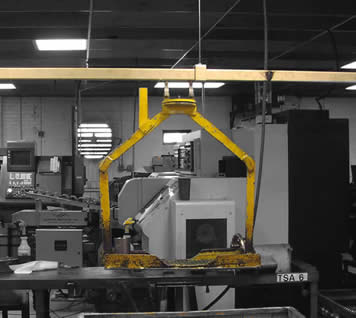 The operator would manually lift the parts into the holding basket on the carrier. The operator would then push the loaded carrier from workstation to workstation with a manual voice notification that the carrier was coming. As you can easily imagine, this made it extremely dangerous due to the size and weight of the parts on the basket. Even the basket itself could seriously injure the person down stream.

The steel structure of the existing conveyor was not efficiently laid out. Designed as a continuous loop, additional unused track had been installed behind the production line in order to complete the track loop.

Another issue with the manual conveyor system was that cycle time between workstations was not consistent. If one assembler finished early they would simply push the basket to the next station, which often created a back up in that next operator’s work area. If one operator fell behind there was no way to tell if they had missed the production rate until the next hour and there was also no way to control the transfer rate of the baskets.

In addition to the safety concerns of this system, there was also significant physical strain imposed on the operators. Not only did they have to push and catch the heavy, moving conveyor baskets but they were also required to lift the 50lb slack adjuster onto and off of the basket!

Olavarria set some criteria for the new assembly conveyor, it must:

The Cardwell team involved in the new layout for the production line included Olavarria, Tom Hankes (Operations Manager), Brian Bodza (Maintenance Manager) and, Dave Barajas (Quality Performance Systems team member).
It was determined that the new production process would consist of two sub assembly tables and one final assembly table in line with one another. The lean reasoning behind the three assembly tables was to more evenly divide the manual work load since the assembly process took the longest time and also to reduce the work in process (WIP) of parts since now the parts that are machined in the location are assembled right there instead of having to travel down stream to a final assembly table.

In addition, since the assembly baskets needed to move only back and forth between the tables there was no need for a continuous loop in the conveyor system that went around the production cell – this change would save considerable floor space.

The PACLINE solution:
Powered Over/ Under Conveyor System with a touch screen control panel.

The area where the new conveyor was to be installed had to be very carefully considered due to the restricted space. Since the old continuous loop type conveyor was deemed unnecessary for the assembly job and it took up valuable space in the production area, D’Alesio recommended using the powered PAC-LINE™ Over/Under enclosed track conveyor system.

Support columns were placed in specific areas that would allow materials to flow into the area and to give the maintenance personal access to the existing machines. In some areas the existing building columns were utilized for support, further conserving floor space. 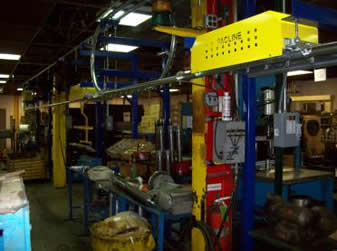 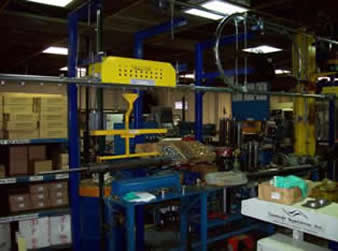 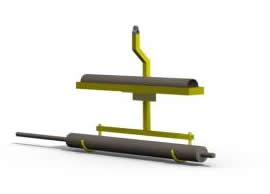 Next, sample parts were given to Pacline to come up with a new carrier design that would accommodate the Cardwell 2300-DJ Slack Adjuster at the various stages of assembly as well as the various parts that had to be transported. Pacline generated the carrier design using their Solidworks software. Solidworks allowed Cardwell to visualize the carrier in a three-dimensional model.

Once the design was approved, the carriers were fabricated and tested for strength and durability at Pacline’s facililty. 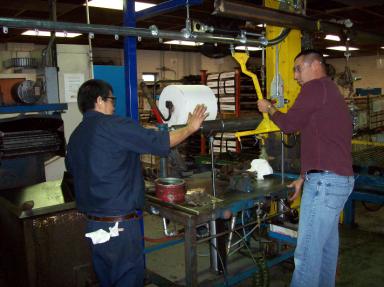 Finally, Cardwell and Pacline met to determine the programming needs for this project. Pacline designed and programmed a control panel that would allow easy change over for cycle time adjustment, as well as lock out features to ensure the proper personal would be the only ones accessing the control panel. This was done by a numeric password accessed on the touch screen display panel.

Safety relays were also installed on each conveyor system to increase the safety of the operators and the conveyor system. These relays worked by sensing the additional amperage needed to power the conveyor when the conveyor runs into an object in its path. Once the amperage goes over the specified limit it shuts down.

Foot switches were also incorporated at each workstation allowing the operators to stop and start the conveyor while keeping their hands free.

The entire conveyor system was setup and wired at the Pacline facility. This allowed Cardwell to get a good visual feel for what the complete system would look like. It also allowed Cardwell and Pacline to debug and correct any issue with the system before implementation into the production line and to prevent any unnecessary down time in production.

Important to the success of the entire project, says Olavarria “was that the Pacline conveyor system was done as a turnkey operation. The conveyor equipment was fully assembled and tested offsite. And in fact, when one error was identified in the testing, it was corrected before the equipment was approved for installation.”

For Cardwell the entire process of taking down the old system and having the new one up a fully operational took only 2 ½ days. Installation took one day and all programming was done in less than a day. For the conveyor project Olavarria was assisted by Dennis Davila Jr. (Industrial Engineering Intern) from Cardwell.

Olavarria commented that, “this was the first project he had worked on that had absolutely no glitches”.