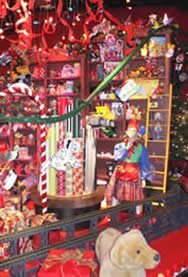 Pacline Overhead Conveyors was called in recently to assist one of Santa’s helpers at the Hudson’s Bay Store in Toronto.

Each year the flagship store of the Bay at Queen and Yonge St. brings the magic of Christmas to their store windows. The Husdon’s Bay Christmas windows attract thousands of visitors (and shoppers) of all ages throughout the Christmas season.

Kevin Davies, President of House of Kevin was hired by the Bay to create his special magic in one of the 5 featured windows. Davies had an idea and the engineers at Pacline Conveyors helped put his magical idea into ‘motion’.

Davies’ window design used a loop of the PAC-LINE™ enclosed track overhead conveyor to animate his display. The conveyor was custom painted green and is loaded with toys being brought into and out of Santa’s workshop.
We think this is how Santa really gets the job done! HAPPY HOLIDAYS!